Conservatives bring forward the next generation of aspirant councillors 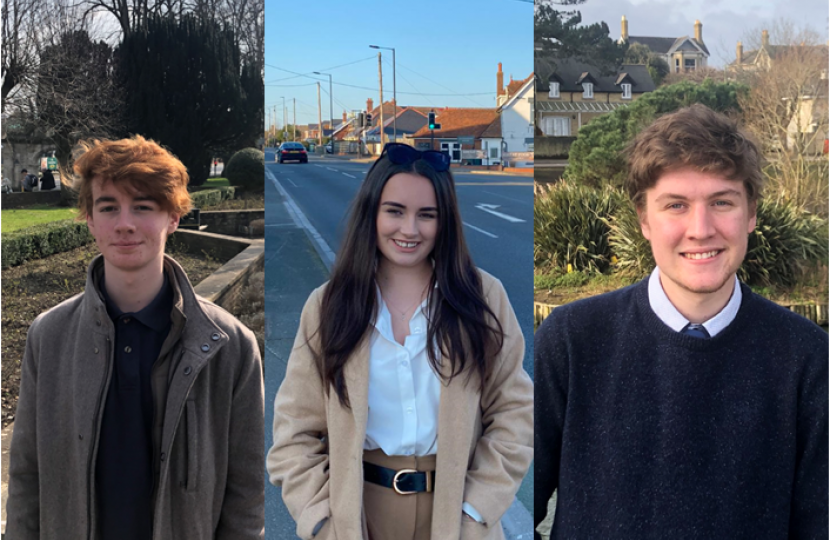 Following the news that Cowes Enterprise College student Matthew Ambrosini will be seeking election as the new IoW Councillor for Newport Central (following his 18th birthday later this week), the Conservatives are delighted to announce two further candidates in their late teens who will also be representing the Party in the forthcoming polls:

With just 15% of councillors (nationally) under the age of 45 – and the age profile of elected representatives on the Isle of Wight similarly skewed to an older age range – the Conservative Party on the Isle of Wight has encouraged some of its younger members to come forward to seek election to the Isle of Wight Council. In addition to Cara, Rhys and Matthew, there are a number of other members in their 20s and 30s who will also be standing as Conservative candidates on 6th May. A full list will be published next week.

Cara – who attended schools in Newport and now works in the hospitality sector – said:

“I am delighted to have this opportunity to put myself forward for election as part of a team of candidates for the Island as a whole. It is widely recognised that public bodies (like the Isle of Wight Council) need to increase their number of younger and female members, and I hope that – by seeking election – I can help encourage more young women to consider standing for public office.

“Following my nomination, it is clear that there are a number of issues in Parkhurst & Hunnyhill that would benefit from having a local councillor who is working as an influential part of the majority group at County Hall. For example, a number of residents have welcomed the Conservative administration’s negotiations with the Ministry of Justice in respect of the ownership of the prison estate roads, and I have pressed the leadership of the Council to ensure that the evident strength of local feeling on this particular issue is taken into account as the decision is finalised. This is just one example of where I hope that a fresh approach, with a new councillor, can help make a difference – as the issue is still just at the first stage of a much longer-term process, requiring dialogue with residents about how such improvements get underway.

“I look forward to getting out and about in Parkhurst & Hunnyhill and meeting more voters, at a distance, between now and polling day. If elected, my role will be to represent residents of all ages who live in the ward, and I also hope to be a voice for younger people from across the Island who may currently feel under-represented.”

Rhys – who attended schools in Ryde and Newport and now works in the care sector – is the grandson of Adrian Axford, the former councillor for Ryde North West who recently passed away. He said:

“My grandfather was a huge inspiration to me, as I grew up observing his considerable involvement in politics and civic life on the Island. His work in the Ryde community sparked my own interest in politics and led to me applying to stand as a candidate in the forthcoming elections. I had very much hoped to be seeking election alongside my grandfather, but sadly he was taken from us too soon.

“However, as we remember the public service he undertook over many years, I am even more determined to honour his memory by seeking to follow in his footsteps. My grandfather did great work for our local community, and I will be following his lead in seeking to do the same. I am just saddened that he is not here to see me do it.

“I recognise that, of course, I have much less experience that many existing councillors and candidates. But if I were elected, I would be working alongside others – bringing my own youthful perspective alongside the experiences and input offered by those who have previously served as councillor or had careers elsewhere. That’s the benefit of having a wider team: we can all collectively contribute. I look forward to chatting to voters over the coming weeks and listening to their views.”

“I am delighted to welcome Matthew, Cara and Rhys on board as the next generation of Conservative candidates. I am the first to admit that the overall make-up of the Isle of Wight Council’s membership is not as diverse as it should be. That is why we have taken steps to recruit these – and other – younger candidates to be part of our full candidate team.

“What I can say is that they have all been selected entirely on their own merits, having been through the same interview process as all other potential candidates. They are exceptionally strong candidates who I am confident will appeal to voters in their own right, as well as helping us broaden the appeal of the Conservative Party on the Island as a whole. I will be supporting them in their campaigns and I very much hope to welcome them to our team at County Hall in due course.”