The OneWight campaign was set up in 2010 to campaign against proposals to merge part of the Island with a mainland parliamentary constituency. It was a cross-party campaign led by Andrew Turner MP. The OneWight website is still available online.

The Coalition Government set out their intentions in 2010 to reduce the number of MPs and equalise the size of parliamentary constituencies. It soon became clear that these proposed changes could lead to the Isle of Wight being split, with part of the Island facing becoming part of a cross-Solent seat.

The key concerns of the OneWight campaign were that the proposal to divide the Island:

The campaign included a parliamentary petition signed by thousands of Islanders being presented to the House of Commons and delivered to Downing Street.

In February 2011, the Government announced that the Isle of Wight would be given protected status with two parliamentary constituencies to be contained within the Island's shores, and not having to share an MP with the mainland. This was voted through Parliament on 17 February 2011.

The OneWight campaign was therefore considered to have been a success.

Following this success, the plans for the reform of constituency boundaries were dropped due to the Liberal Democrats withdrawing their support. Therefore the Isle of Wight will remain as one single parliamentary constituency in the 2015 General Election. 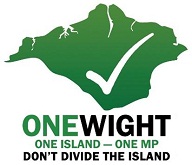