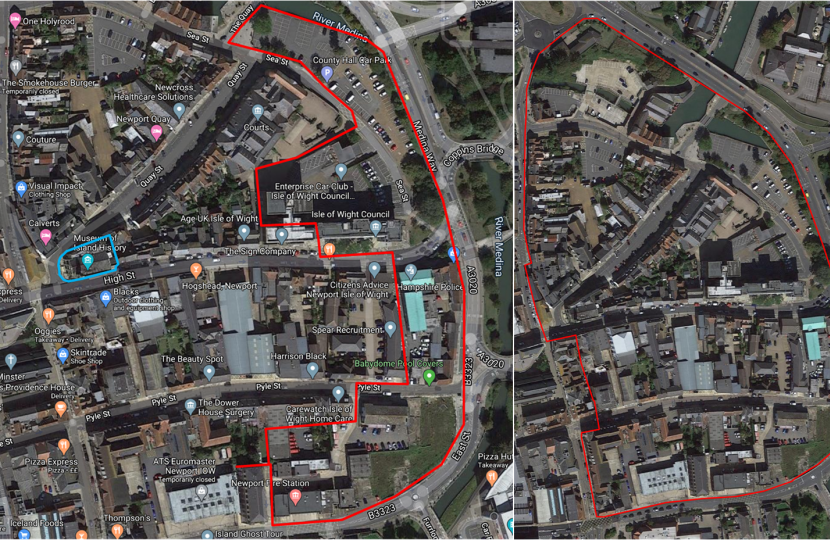 The Conservative leadership of the Isle of Wight Council is today unveiling a set of ambitious ideas for how Newport Town Centre could be transformed over the coming years, whilst protecting green space from development elsewhere on the Island.

Recognising how the pandemic has significantly accelerated the pace of change in the High Street, it is proposed to seize the opportunity this presents to breathe new life into the Island’s County Town.

At the heart of this new vision – which would complement the Newport Harbour Masterplan (following the approval of the Harbour Revision Order) and the town’s Heritage Action Zone designation – is a proposal to establish a vibrant “Newport Riverside” Quarter in the eastern part of the town centre which sits alongside the River Medina. This will be a key pledge within the forthcoming Conservative manifesto.

With the Harbour Masterplan having been adopted at the end of last year – and with the Seaclose housing element dropped – it is now proposed to provide new housing on brownfield land in the town centre, whilst Seaclose Park would see sports and recreation facilities enhanced (potentially including a new football ground) for new and existing residents, as part of the wider regeneration of the harbour area.

Through a submission to the Council’s recent “call for brownfield sites” consultation, Councillor Dave Stewart outlined how the Council could work with public sector partners (including the police, the fire authority, the CCG and Homes England) to bring forward a high-quality, sustainable mixed-use regeneration scheme on public sector land within a defined red line (see accompanying image), ahead of inviting other landowners in a wider defined area to consider doing the same.

If these ideas are taken forward, the regeneration would include:

Whilst regeneration of Newport Town Centre would be not be limited to the proposed Newport Riverside Quarter area (and Class E premises outside of it may still be entitled to change to residential under the Government’s new planning rules - as recently announced), it is proposed that a greater emphasis is placed on retaining retail / commercial uses in the areas outside of the Quarter boundary. This would mean that Newport has a smaller, but more vibrant retail core from the area to the west of Sts' Thomas Square to the current boundary with Carisbrooke Road.

Speaking about the new vision – which is supported by all seven Conservative candidates standing in Newport seats in the forthcoming elections – Conservative Group (and Council) Leader Cllr Dave Stewart said:

“The pandemic has had an irreversible impact on our town centres, including Newport. Rather than managing decline, we must now look at how we take a radically different approach to breathe new life into our County Town, which will also help us protect green spaces elsewhere on the Island.

“What we are unveiling today is a set of ideas to start a dialogue with fellow Islanders about how we revitalise Newport Town Centre. These are, at this stage, just proposals – but ones which we intend to take forward with vigour if re-elected in the forthcoming elections.

“I firmly believe that the Council must lead the way. The local authority has riverside landholdings at the heart of the town centre, including our principal offices which are now significantly under-occupied due to the rollout of home-working. Whilst staff will still need places to meet in person from time to time, it is evident that this can be provided on a much smaller scale in a series of locations around the Island. It is therefore right that we look to release the majority of the County Hall site (and adjoining car parks) to unlock the regeneration of Newport through this riverside development, making it an even more attractive place for people to live and visit.

“We would also look to establish a new combined headquarters and operation centre for public services, combining facilities for the police, the fire service, elements of health provision (separate to St Mary’s) and the local authority. A number of potential locations for such a hub are under consideration, but we must not compromise our commitment to securing value-for-money by talking about specific sites at this stage. Having a combined location also aligns with our approach to secure a more integrated approach to the delivery of public services, strengthening what was put in place during the pandemic. We are also determined to keep a staff presence in the town centre to support High Street footfall during the day.

“I am confident that we can work with our public sector partners to see a number of their sites added to the mix. There are also many privately-owned buildings within the proposed Quarter, and the owners of many of these properties will already be considering the possible use of new planning rules to enable a change to residential. Whilst this is understandable, there is also the potential for the Council to explore whether more substantial changes – in keeping with Newport’s historic character – could be granted planning permission to further improve the diversification of the town centre.

“We also recognise that there is widespread public concern about the potential for many more new homes being built on open green space in different parts of the Island. By bringing forward proposals such as our Newport Riverside Quarter vision, we can remove the need – for many years – to provide new residential properties in our green spaces (unless there are exceptional reasons to do so). Protecting the Island’s countryside is a key part of our forthcoming manifesto, and this Newport Riverside proposal will help us achieve that.”

“I am delighted to support the Conservative administration's ambitious vision for Newport town centre. It is essential that the police have modern facilities in the Island’s County Town. By releasing the existing police station site to form part of the Riverside regeneration, we can look to develop a fit-for-purpose headquarters elsewhere to Newport as part of a wider public sector hub. If elected on 6th May, I look forward to working with the Council to take these proposals forward.”

“Newport town centre has been through a very challenging year. Residents have been telling me that a different approach is needed, and I am delighted to back these proposals for the future of our County Town. Bringing hundreds more people to live in Newport Town Centre will provide much needed footfall for local shops and catering establishments – including helping to grow a vibrant night-time economy.

“If we focus on getting the details right, we can ensure that these are local homes for Islanders, with a range of tenures – including giving more people the opportunity to get their foot on the housing ladder. I will be discussing these proposals with Newport Central residents over the coming weeks, and I look forward to listening their feedback.”

It should be recognised that these are just preliminary proposals at this stage and would be subject to further work – including the development of detailed planning policies and feasibility assessments – in due course.

Please see accompanying images at the links below: