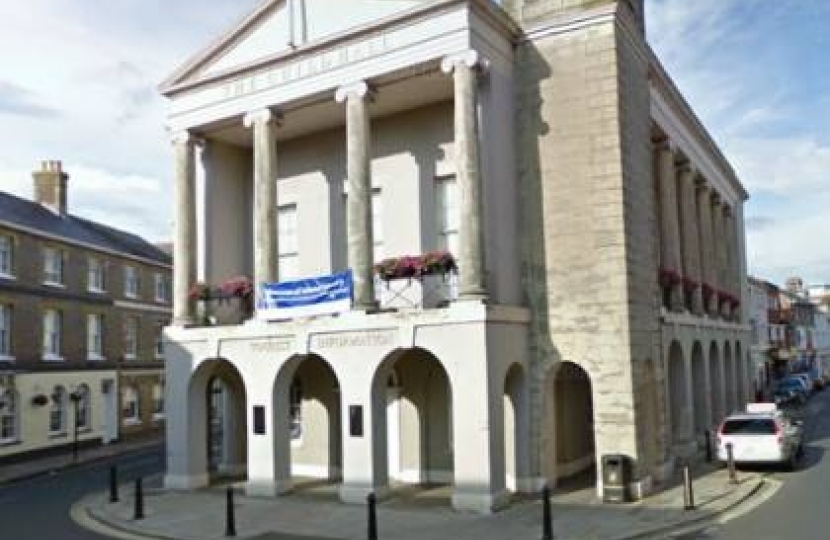 The Isle of Wight Council has unveiled its plans to establish a new County Record Office in the Guildhall, the landmark John Nash building in Newport High Street. In doing so, the Council hopes to be granted a new licence to hold public records and secure the future of these archives on the Island. A licence for public records has not been held by the local authority since 2003.

In a report due to be considered by the IW Council’s Cabinet on Tuesday 8th January, this first major step as part of a longer-term Island Heritage Strategy is being recommended. The report acknowledges that the Council is at risk of losing custody of the Island’s public records if it does not develop a suitable plan for the future that meets specific requirements for storage, display and accessibility standards.

In making such clear recommendations for the future of public records, the plans intend to firmly reject any surrender of these documents and artefacts to The National Archive. It is recognised that such a situation would be against the Island’s interests: running contrary to a desire for local preservation of this heritage.

Cllr Dave Stewart, the Cabinet Member responsible for heritage said: “As an Islander, I am determined that our historic records and archives are retained here within our Island shores. We now have the opportunity to not only secure their future but also to be granted a new licence to hold them in suitable premises for storage and improved public access.

“There are a wide range of heritage focused community organisations on the Island which have contributed their knowledge and expertise to our recent heritage review. Their input has helped shape our plans to put the much-loved Guildhall at the heart of our new Island Heritage Strategy, starting with a commitment to establish the County Record Office there. I hope that these groups will continue to be involved as these plans go forward.

“Whilst there is much work still to do, I am confident that this initiative can dovetail with a reviewed Museum of Island History in the Guildhall, with expanded opportunities for partnership heritage displays and information. These ambitious plans will be developed further over the coming weeks and months.”

Cllr Dawn Cousins, the IW Councillor for Newport North and a long-time resident of the town added: “I am overjoyed that the Guildhall is set to be put to such good use. Newport and the rest of the Island have such a proud and rich history, and I can’t think of anywhere more appropriate than the Guildhall to be the focal point for this interest. The Guildhall is the central jewel in the Island’s crown of heritage, and these plans confirm that.

“I would like to thank Newport residents for their patience in waiting for this clear future use of the Guildhall to be properly developed. It is essential that we now get behind this Council-led initiative and ensure it becomes something which is hugely valued not just by residents but also by visitors – forming part of our tourism offer.”

As the report will set out, this Grade II* Listed Building is considered suitable to host the County Record Office, provided that necessary internal structural changes are made. Furthermore, it has been confirmed that the Guildhall has the potential to provide a home for all the records being relocated from the existing office at Hillside, as well as some from other locations. There are a number of other technical requirements – which are considered achievable – in order to meet the necessary standard for the Island to be granted a new licence.

It is anticipated that approximately £6 / £7 million capital investment would be needed, over time, to ensure that the necessary standard of storage and facilities are provided in the long-term (at the Guildhall and elsewhere) to fulfil the local authority’s statutory obligations for holding records and its wider archive collection. By securing a new licence to hold public records, the Council and its heritage partners would be in a stronger position to apply for grant funding to deliver the plans. In order to provide a basis for initial investment and / or match funding, the Council is proposing to allocate £3.5m of capital funding over the next two financial years in support of the delivery of the Island Heritage Strategy (including the plans for the Guildhall).

“As an Islander, I am determined that our historic records and archives are retained here within our Island shores. We now have the opportunity to not only secure their future but also to be granted a new licence to hold them in suitable premises for storage and improved public access."
Cllr Dave Stewart