Launch of Conservative campaign for the IoW Council elections 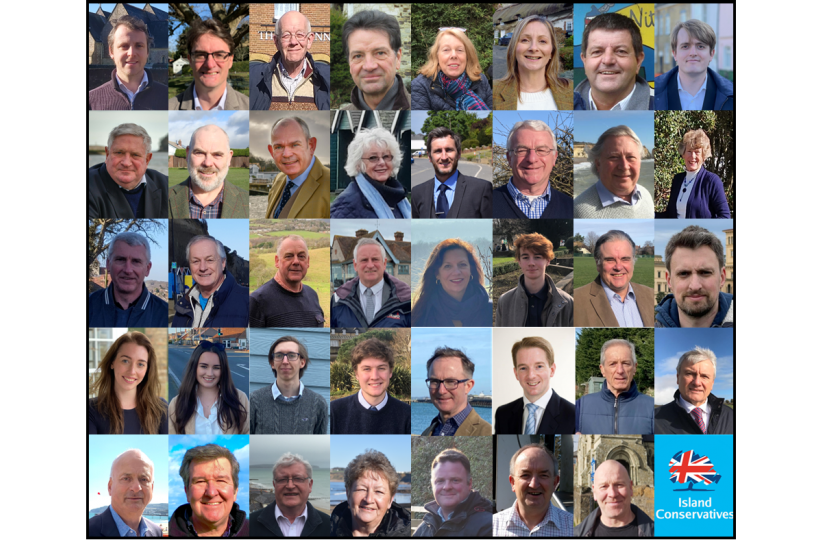 The Island Conservatives are today (Tuesday 13th April) launching their campaign for the Isle of Wight Council elections on Thursday 6th May.

Following a pause in campaigning in recognition of the sad passing of His Royal Highness the Duke of Edinburgh, the 39-strong team of Conservative candidates will – over the coming weeks – be sharing their priorities for both their local areas and the Island as a whole. (There will be a brief further break in campaigning on Saturday for the day of Prince Philip’s funeral.)

The Island Conservatives are also committed to campaigning in a Covid-secure manner. As previously announced, it was decided not to undertake door-to-door campaign activity until such time as the “Stay at Home” restriction ended. This was to avoid unnecessary contact and also prevent heightened anxiety amongst older and vulnerable residents. As the campaign gets underway, all Conservative candidates will be undertaking twice weekly rapid response COVID-19 tests, ahead of delivering leaflets. A decision has also been made not to knock on doors at any time during the campaign, but Conservative candidates are happy to speak to voters outside (whilst maintaining social distancing).

As the only party on the Isle of Wight to offer a candidate in every ward, the Island Conservatives are giving all voters the opportunity to choose a Conservative councillor to represent them.

Launching the campaign, Cllr Dave Stewart – the Conservative Leader of the Isle of Wight Council – said:

“Over the past four years, we have steered the local authority – and the Island – through some challenging times, particularly over the past 12 months.

“When we took office in 2017, we inherited a dysfunctional council with “independent” councillors having depleted reserves and refusing to set a budget for the ensuing year. We have now been able to set five lawful, balanced budgets – and ensure a responsible approach is taken regarding the management of public finances.

“Looking to the future, we are focused on continuing to lead the Island to safe, strong recovery from the pandemic – and help get our local economy back on its feet. With 75% of adult Islanders having now received the first dose of the vaccine – and Step 2 of the roadmap out of lockdown now in place – we can look forward to better times ahead.

“We are committed to serving the Isle of Wight as a whole. Other parties may claim to take an interest in our entire Island, but the lack of their candidates standing in a number of key locations suggests that they consider some areas less important than others. Labour and the Liberal Democrats are not even defending seats that they won last time. In contrast, the Conservatives are willing to represent every corner of the Island, as we consider that all communities – every town, village and hamlet – are equally important and should be given the opportunity to be represented by us.”

Speaking following the close of nominations, Cllr Stewart went on to say:

“Looking at the number of candidates put forward by each political party or grouping, it is evident that only the Conservatives (with 39 candidates) and Labour (with 28) are in a position to secure a majority to lead the Isle of Wight Council.

“The Island therefore faces a clear choice: between: (1) a Conservative administration comprised of both existing, experienced councillors and new candidates bringing fresh input, and (2) a Labour-led council made up entirely of new and untested councillors. Like in a General Election, this allows voters to choose between two competing visions and personnel to lead the Island over the next four years.

“We are delighted to offer the Isle of Wight a strong, diverse team – with a 60 year age range between the youngest and the eldest, and more female candidates than any other party.

“Furthermore, our new candidates will – if elected – bring a wide range of experiences to the Isle of Wight Council, including a dementia charity adviser, a former policewoman, a care worker, a baker, a retired headteacher, a town mayor, a business management consultant, financial advisers, students, a recent graduate, an office manager, a retired prison officer, a care home catering manager, a finance director, a hospitality worker, an engineer, a litigation consultant, a digital communications manager and a retired barrister, amongst others.

“With these backgrounds, we are confident that our team – as a whole – offer a uniquely strong skillset to bolster the Conservative Group at County Hall, helping us provide a combined, united leadership to the Isle of Wight Council which is representative of the Island at large.”

In launching the campaign, Cllr Stewart also released the Island Conservatives’ 18-point plan for the future of the Isle of Wight, grouped under six key themes:

The full plan – which sits alongside the Isle of Wight specific pledges from Donna Jones, the Conservative candidate for Police & Crime Commissioner (also up for election on Thursday 6th May) – can be viewed / downloaded by clicking on the link further below. All Isle of Wight households will receive a copy of this double-page spread, within every Conservative candidate’s leaflet.

“I am delighted to have this opportunity to represent the Isle of Wight’s interests in relation to policing and crime matters. Although the position relates to what is known as Hampshire Constabulary, I very much see the Isle of Wight as an equal part of the policing area; and have committed to rename the force to reflect this.

“In addition, I have – in discussion with the Conservative leadership on the Island – developed three key pledges for how I would work with the Council and others to tackle crime and anti-social behaviour on the Isle of Wight.

“On 6th May, I am seeking election alongside 39 excellent local candidates, and ask Islanders to vote Conservative twice: once in the IoW Council elections and also for me to represent your interests as the Police & Crime Commissioner for Hampshire and the Isle of Wight.”

Speaking in support of the campaign, the Island’s MP Bob Seely said:

“Over the past four years, I have worked closely with the Conservative leadership at County Hall to help secure investment in the Island — including £48m extra for the NHS and over £50m for upgrades to transport infrastructure.

“We are now set to receive millions for the IoW College; and — with the Isle of Wight Council — I am preparing a strong bid for post-Brexit funds, to help revitalise our town centres and coastal communities. This is in addition to ongoing work to ensure the Island gets a good deal in the Fair Funding Review (which has regrettably been delayed by the pandemic).

“I would urge all Islanders – particularly those who voted for me in the 2019 General Election – to support your local Conservative candidate in the Isle of Wight Council elections, along with Donna Jones for Police & Crime Commissioner.

“We need a strong Conservative Team on the Council, continuing to join forces with me to coherently make our case to the Conservative Government.

“Working together, we can achieve so much more — including our efforts to protect the Island’s countryside and prioritise brownfield sites to provide homes for Island families.”

The Conservative Group at County Hall is outlining proposed changes to the Isle of Wight’s future planning framework – in order to secure a greener, sustainable and more affordable plan.